Read more: Stars of album covers… as they look today

His comments came after he addressed the reasons why he has decided to resume his solo career with the launch of a Las Vegas residency.

Speaking to the Las Vegas Review-Journal, Roth said: “Ed’s [Van Halen] not doing well, and singing and dancing is a perishable skill. If you have the capacity, it’s something that has to be used routinely, if not for the thrill of it and the magic of creating with other incandescent spirits.”

What he’s referring to isn’t exactly clear, but back in October it was reported that Eddie was undergoing surgery for throat cancer. It came 20 years after the guitar icon had treatment for tongue cancer.

After being given the all-clear from the initial diagnosis – which he says was brought on by having metal guitar picks in his mouth while performing gigs – in 2002, TMZ reported that the guitarist had been undergoing radiation treatment for throat cancer for the last five years.

In October, Roth said that Van Halen was “finished.” Speaking on Detroit radio station WRIF about his Las Vegas residency, the 64-year-old was asked whether he was “bummed out” that he’d been unable to play live with the ‘Jump’ group over the summer.

“That’s been cancelled a number of times, and I think Van Halen’s finished and this [his solo project] is the next phase,” he replied.

Meanwhile, Billie Eilish was defended by Van Halen after the singer admitted that she didn’t know who the 80s rock giants were.

Previous Harry and Meghan: what price their independence?
Next Iran’s military says it thought the Ukrainian passenger plane it shot down was a US military plane 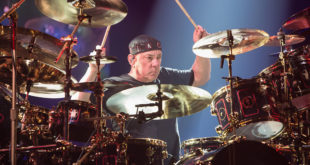