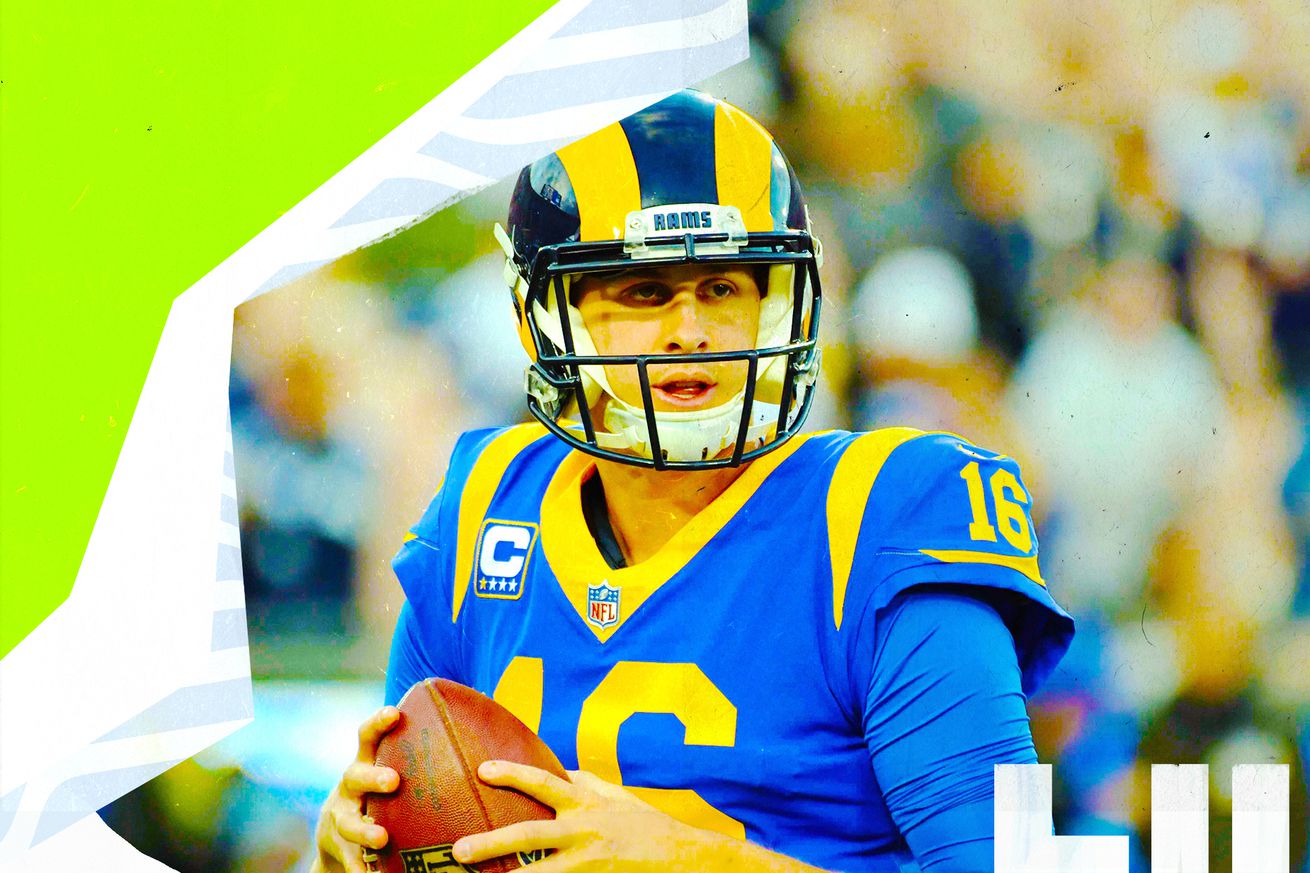 The Rams’ quarterback has the credentials of an NFL star, but not much of the name recognition that usually comes with it.

In October, the NFL Players Association released a list of the top players in terms of licensed product sold. It had the Patriots’ Tom Brady in the top spot — one of 21 quarterbacks on the list of the top 50 players.

Rookies Sam Darnold, Baker Mayfield, and Josh Allen all did. Both of Eagles quarterbacks, Carson Wentz and Nick Foles, were in the top eight. But Goff — the No. 1 pick in the 2016 NFL Draft and a Pro Bowler in 2017 — didn’t move enough jerseys and merchandise to land on the list.

In 2016, rapper The Game, who’s from Southern California, dropped a Goff reference in his song “92 Bars” — except he got the name wrong.

The Rams is back, them bullets getting tossed16 on your back like you fucking Jeff Goff

It’s almost inconceivable that Goff is still such an anonymous player. But the Rams are set to play in Super Bowl 53, and there’s little reason to believe the team won’t be a contender for many years to come. Goff isn’t going to be unknown for long.

Why is Goff still flying under the radar?

There are plenty of reasons why Goff is a No. 1 overall pick, two-time Pro Bowler, and Super Bowl starter who still isn’t a household name. He’s not exactly boring, but he’s certainly not the kind of player with a fiery, heart-on-his-sleeve personality like Baker Mayfield.

That’s not a bad thing at all.

“What I love most about Jared is he doesn’t let the circumstances of a game – good or bad – affect the way that he competes as the game progresses,” Rams coach Sean McVay told NBC’s Mike Tirico in December. “And I think that fearless nature, not being afraid to fail and always attacking success, is something that certainly helps me as a coach and certainly resonates and rubs off on our offense.”

Goff spent his college career racking up stats for a Cal team that went 14-23 in his three years as the starter. He was terrible as a rookie when he took over for the Rams midway through the 2016 season. He didn’t win a game in his four starts with Jeff Fisher as the coach, and Goff finished the year with five touchdowns and seven interceptions in seven games.

It wasn’t until McVay arrived the next season that the Rams offense took off, and so it’s the young and exciting head coach who gets most of the credit. Goff also has Todd Gurley, arguably the best running back in the NFL, with him in the backfield.

And even though the Rams relocated in 2016 to the huge Los Angeles media market, the team is still one of the NFL’s least popular franchises.

All of that has combined to make Goff a player who doesn’t get much love when the Rams succeed. He usually isn’t the first to be blamed when the team struggles either.

At a certain point, that’s due to change — and probably soon.

Goff has played like a quarterback everyone should know

Most importantly, Goff started making the type of difficult throws he didn’t have to make often in his first season with McVay.

Goff trusted himself to fire passes into tight windows:

Probably one of the best throws of Goff’s career. pic.twitter.com/nctGvVsPj9

And he excelled at dropping touch passes over defenses — even if he was forced out of the pocket:

Goff slowed down in the beginning of December and fell out of MVP contention, but the Rams still finished 13-3 and earned a first-round bye.

That’s because even when the Rams offense isn’t at its best, it only needs a few great throws from Goff to be an explosive, scary group. While he hasn’t been an elite quarterback in the playoffs, he has managed to make the big throws when the Rams need it most — like this perfect lob to Brandin Cooks before halftime in the NFC Championship.

The Rams quarterback didn’t need to throw for 500 yards to beat the Saints, he just needed to make the throws when they were there and avoid negative plays. A couple of his most important plays came in overtime when he had the poise and calm to complete passes with pass rushers in his face.

Greg Zuerlein would’ve hit from like 75, but this play from Jared Goff was so unbelievably clutch pic.twitter.com/xZpq5otcdw

Those kind of throws show the growth that Goff is still making. He’s still only 24 and will likely only continue to improve.

That means you’re probably going to be seeing a lot of Goff and the Rams over the next decade or so.

He won’t be out of sight any more

Goff’s anonymity isn’t a new development. Here’s what we wrote about him in September after he started the year with 11 touchdowns and two interceptions in the first month of the season:

In the offseason, Jared Goff did a fun prank on a community college football team. The Los Angeles Rams quarterback put on a wig, got a few temporary tattoos, and practiced with a team who was told a new transfer student was there to challenge for the starting job.

Despite the fact that Goff’s face was clearly visible and he was having conversations with his new “teammates”, none of them recognized the No. 1 pick in the 2016 NFL Draft.

It’s the type of prank that’d take a much more convincing disguise if 2018 first overall pick Baker Mayfield tried to pull it off. The Cleveland Browns rookie was the most visible man in college football last year, he’s must-watch TV now with the Browns, and he’s the star of a few hilarious Heisman House commercials.

Goff is the opposite. You know he’s the Rams quarterback and you know he was the No. 1 pick. Quick, try to name absolutely anything else about him.

Not much is different four months later.

Goff did a little social media flirting with Halle Berry, and he’s getting some Super Bowl-related TV time. But would you really shocked if someone still thought his name was Jeff Goff?

But now Goff is about to play in front of over 100 million viewers. And regardless of the outcome of Super Bowl 53, he’ll certainly get a lucrative contract extension from the Rams in the upcoming offseason or in 2020.

Goff has the credentials of a star football player, but not much of the fame that comes with it. That’ll change soon.

Previous This week, vegan design was in the spotlight
Next Malaysia stripped of 2019 World Para Swimming Championships over Israeli participation