Neil Peart, the visionary drummer and lyricist for Rush, has died.

Confirmed by Elliott Mintz, a spokesperson for the Peart family, the 67-year-old passed away on Tuesday (January 7) after quietly battling brain cancer for the past three years, according to Rolling Stone.

Often considered one of the greatest drummers to ever pick up a pair of sticks, Peart joined Rush in 1974 along with singer/bassist Geddy Lee and guitarist Alex Lifeson. His flamboyant yet definitive style helped make the trio one of the key bands of the classic-rock era.

Lee and Lifeson released a statement today (January 10), calling Peart their “friend, soul brother and bandmate over 45 years,” and said that he had been “incredibly brave” in his battle with glioblastoma, an aggressive form of brain cancer.

“We ask that friends, fans, and media alike understandably respect the family’s need for privacy and peace at this extremely painful and difficult time,” Lee and Lifeson said. “Those wishing to express their condolences can choose a cancer research group or charity of their choice and make a donation in Neil Peart’s name. Rest in peace, brother.”

Aside from being the band’s drummer, Peart was also the Canadian band’s primary songwriter. He was also the author of numerous books, including his first, The Masked Rider: Cycling in West Africa, which written in 1996 about a month-long bicycling tour through Cameroon. 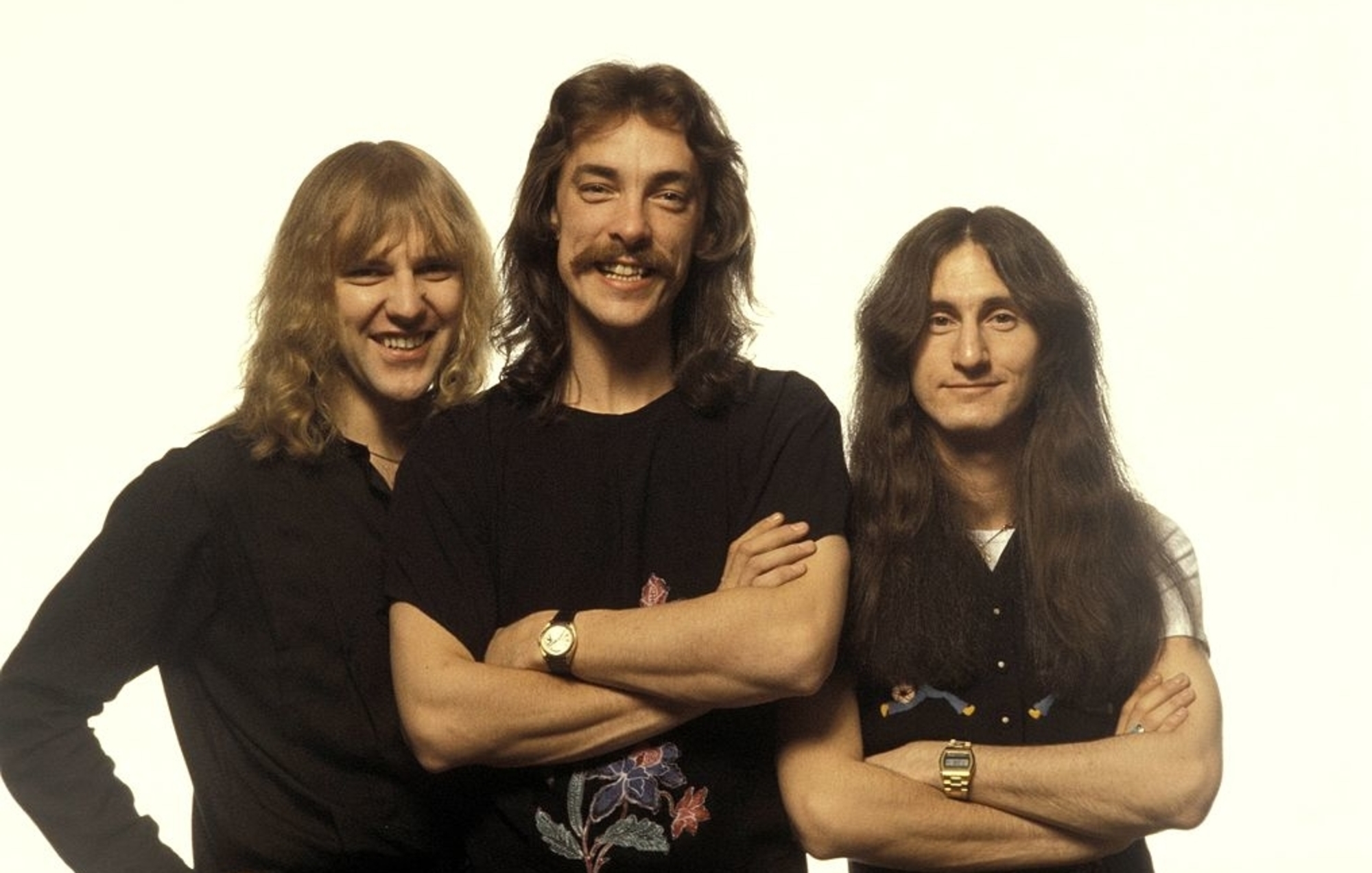 Peart announced his retirement from Rush in 2015. Following the announcement, Dave Grohl was asked in an interview if he would tour with Rush if Geddy Lee and Alex Lifeson asked him to fill in for Peart. He replied: “I’d say ‘I’m not physically or musically capable, but thanks for the offer.’ Neil Peart, that’s a whole other animal, another species of drummer.

“I know the arrangements, but I’m like Meg White to Neil Peart,” he added. “And she’s one of my favorite drummers!”

“Today, the world lost a true giant in the history of rock and roll,” he said. “An inspiration to millions with an unmistakable sound who spawned generations of musicians – like myself – to pick up two sticks and chase a dream. A kind, thoughtful, brilliant man who ruled our radios and turntables not only with his drumming, but also his beautiful words.”

He added: “I still vividly remember my first listen of ‘2112’ when I was young. It was the first time I really listened to a drummer. And since that day, music has never been the same. His power, precision, and composition was incomparable. He was called ‘The Professor’ for a reason: We all learned from him.”

Tributes have begun to pour in for the Rush stickman.

Beach Boys legend Brian Wilson wrote: “just heard about Neil Peart passing. I feel real bad about this – he was way too young. Neil was one of the great drummers and he’ll be missed. Love & mercy to Neil’s family.”

I just heard about Neil Peart passing. I feel real bad about this – he was way too young. Neil was one of the great drummers and he’ll be missed. Love & mercy to Neil’s family.– Brian pic.twitter.com/T5qjECWX1W

Public Enemy‘s Chuck D remembered the night he spent with Peart following their induction into the Rock and Roll Hall of Fame. “At the end of a crazy @rockhall night in 2013 where @rushtheband & @PublicEnemyFTP were inducted. It was just myself & Neil PEart alone talkin & laughing low in relief the long night was over-a small table backstage sharing a unique moment without much word. Rest in Beats my man,” he tweeted.

At the end of a crazy @rockhall night in 2013 where @rushtheband & @PublicEnemyFTP were inducted. It was just myself & Neil PEart alone talkin & laughing low in relief the long night was over-a small table backstage sharing a unique moment without much word. Rest in Beats my man

Comedian Dave Foley said: “Over 20 years ago, one of my best friends John Kastner(@jeanguykastner) brought Neil Peart to my house in Laurel Canyon. We stayed up all night drinking whiskey and talking on more subjects than I knew existed. He was the friendliest curmudgeon in the world. We’ll miss him.”

He added: “Deepest sympathy to his wife Carrie and daughter Olivia and to Alex and Geddy. We’ll never see his like again.”

Deepest sympathy to his wife Carrie and daughter Olivia and to Alex and Geddy. We’ll never see his like again. #NeilPeart

Comedian Rick Mercer said: “A drum lesson from Neil Peart was one of my best days on the job ever.” While CNN news reporter Jake Tapper added: “RIP Neil Peart, iconic drummer and lyricist for RUSH.”

A drum lesson from Neil Peart was one of my best days on the job ever. https://t.co/wzRoqWHqwI

Another tribute came from KISS’ Tommy Thayer who wrote: “So sad to hear about Neil Peart passing. My deepest condolences to his family, friends and fans.”

So sad to hear about Neil Peart passing. My deepest condolences to his family, friends and fans. #NeilPeart pic.twitter.com/B8tM4ZcIQQ

Really sorry to hear about Neil Peart’s passing. He was an amazing drummer and made a huge ccontribution to Rock music. All my best to Alex and Geddy.

My deepest and most sincere condolences to Neil’s family and friends, and to Rush fans everywhere. What a brilliant and wonderful man. He left his mark on the world, music, drumming and so much more. With absolute love and Respect, Rest In Peace. https://t.co/569ssIL8pr pic.twitter.com/5bccoBnuIf

My prayers and condolences to the Peart Family, Fans and Friends. Neil was a kind soul. R.I.P……. Rush Drummer Neil Peart Dead at 67 – Rolling Stone https://t.co/icYz6fnXfE

Neil Peart thank you for getting me through every junior high math class and constantly blowing my mind #rushforever https://t.co/WUt8biznyX

What a sad day for the musicians world Neil Peart dead at 67. Rush's music influenced me and so many musicians as a composer, lyricist and rocks most meticulous drummer ever.Thank you Neil ! pic.twitter.com/M9a8fkSVE9

It absolutely breaks my heart to pieces to get the news of the passing of one of my greatest heroes of all time. Neil…

No one in the history of the planet has inspired more air drumming than Neil Peart.

RIP Neil Peart.In the hierarchy of rock drummers, he may (or may not) have equals…but NO ONE was better. #Rush #neilpeart

RIP to a master

RIP Neil Peart. A true artist and a sweet, good guy. And probably the most air drummed drummer of all time. This is my tribute…air drumming one of THE greatest, iconic drum moments in rock history. #neilpeart #rush https://t.co/01RW6pYWIl

Fuck this timeline. Definition of gut punched. I feel like I just lost my cool uncle. My cool uncle that was also the best rock drummer to ever live. So sad there will never be Rush 50, still thought I’d see them one last time in Toronto doing a one off. RIP Neil Peart pic.twitter.com/FpMTMJT199

It is unbelievably sad to hear that my favorite drummer of all time, Neil Peart, has left us. Very hard to find words to properly express the level of inspiration & influence he had on so so many musicians. He will forever remain at the top of my list. Farewell to a true king. pic.twitter.com/A9QkSWg2f9

The greatest of all time. RIP Neil Peart. I’m going to go raise a glass and then air-drum the shit out of Tom Sawyer. https://t.co/pL3xL4PUa0

Damn man. Neil Peart wrote an insane amount of jams, like straight up untouchable prog rock battle hymns…RUSH SHALL BE ON BLAST now and forever