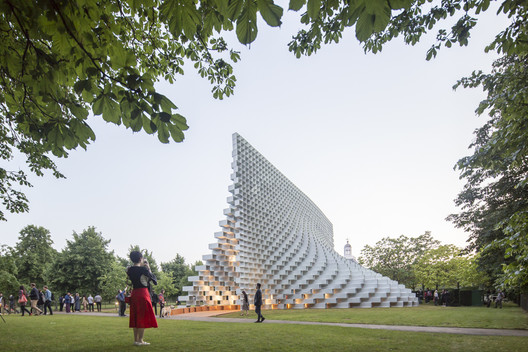 If the surest sign of summer in London is the appearance of a new pavilion in front of the Serpentine Gallery, then it’s perhaps fair to say that summer is over once the pavilion is taken down. The installations have gained prominence since its inaugural edition in 2000, acting as a kind of exclusive honor and indication of talent for those chosen to present; celebrated names from the past names include Zaha Hadid, Rem Koolhaas, and Olafur Eliasson.

The premise is simple: an architect who has not built in the UK is invited to design a pavilion, with the intention of sharing their talent amongst a new and influential audience. Chosen designers are given a mere six months to design and construct their pavilion; a compressed timeline that encourages experimentation and quick thinking.

But, despite all the pomp, circumstance, and famous faces involved in the yearly event,  the pavilions are temporary installations. So what happens to them once their time in the Serpentine Park is up?

Here, in reverse chronological order, the second lives of the Serpentine Pavilions: 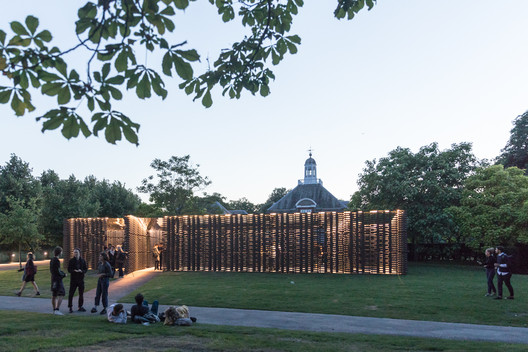 The most recent pavilion, designed by Mexican architect Frida Escobedo (only the second woman to design a pavilion in the event’s 19 year history) was bought by spa operator Therme Group. They said, in a joint statement with Serpentine Gallery artistic director Hans Ulrich Obrist, “Frida Escobedo’s design for the Serpentine Pavilion is a subtle interplay of light, water, and geometry. Her atmospheric courtyard-based structure draws on both the domestic architect of Mexico and British materials and history.”

While specific plans for the structure have not been announced, it’s safe to assume that the pavilion’s future will be a luxuriant one. 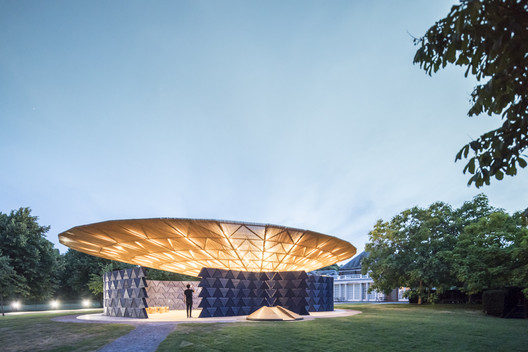 Kere’s pavilion, which sought to engage with the local climate and natural surroundings, was bought by the Malaysia-based Ilham Gallery. Unfortunately the pavilion proved too large for the gallery itself; gallery director Rahel Joseph announced plans in 2017 to install the pavilion in a publicly-accessible location. Since then there’s been little news, so the pavilion’s final location is unclear. 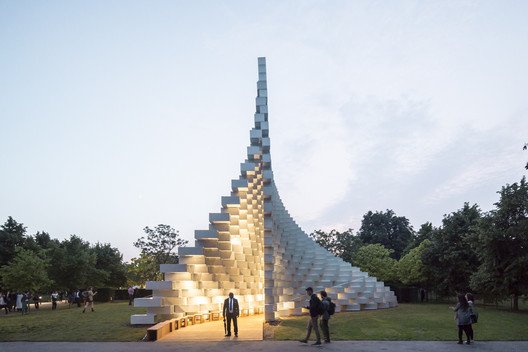 BIG recently announced two major milestones in Canada: the topping out of their Vancouver House project and the relocation of their 2016 Serpentine Pavilion to Toronto. The pavilion, which was bought by Canadian developers Westbank, will be part of an exhibition titled “Unzipped” and will play host to a number of local events and lectures.

But Toronto isn’t even the sinuous structure’s final home – the pavilion will move later to Vancouver, and there’s talk of installations in New York and Shanghai in the future. 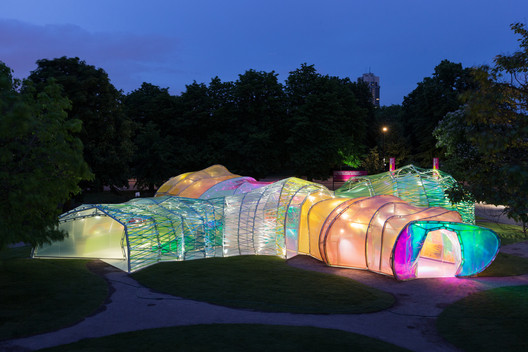 The pavilion was bought by London co-working company Second Home, who also commissioned the architects to design their Holland Park and Spitalfields locations. Second Home has announced plans to install the pavilion in one of their upcoming Los Angeles locations, tentatively scheduled to open in 2020. 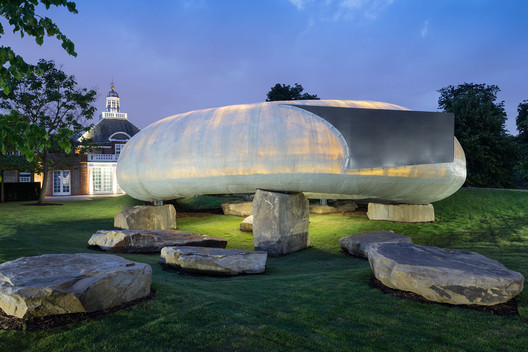 Chilean architect Smiljan Radic’s pavilion was perhaps one of the most enigmatic to date; a translucent shell perched atop an assortment of quarry stones. The design was inspired by a papier mâché model Radic had previously designed as a response to the Oscar Wilde story “The Selfish Giant.”

The pavilion was purchased by London gallerists Hauser + Wirth and was ultimately installed in their Somerset park location. 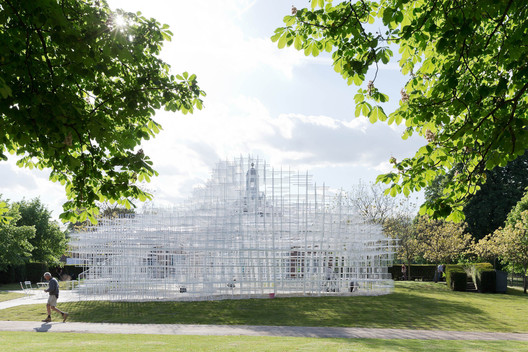 Nicknamed “The Cloud”, Japanese architect Sou Fujimoto’s pavilion was an exercise in lightness and modularity. The pavilion was composed of bright-white grid modules stacked together to create a amorphous and open structure. The pavilion sold privately after exhibition, and is unfortunately no longer publicly accessible. 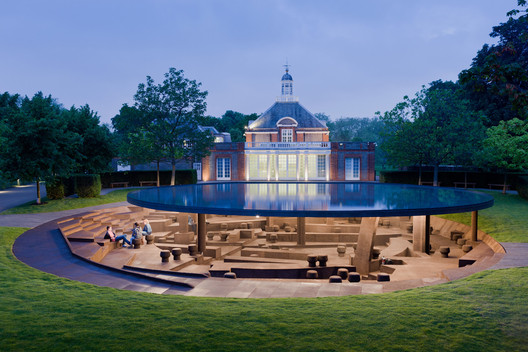 Swiss masters Herzog & de Meuron teamed up again (following their success with their 2008 Bird’s Nest collaboration) with famed Chinese artist Ai Weiwei for the 2012 edition of the pavilion. The pavilion took an unusual approach, digging into the ground to create a pavilion that appeared to float slightly above the ground. The roof of the pavilion sat upon 12 distinct designed columns, referencing the twelve years of the pavilion program. The pavilion read as an archaeological dig-site, encouraging the spectators to reflect about the Serpentine’s past. The pavilion was bought by Indian steel magnate Lakshmi Mittal and his wife, Usha, and has been installed in their estate in Surrey. 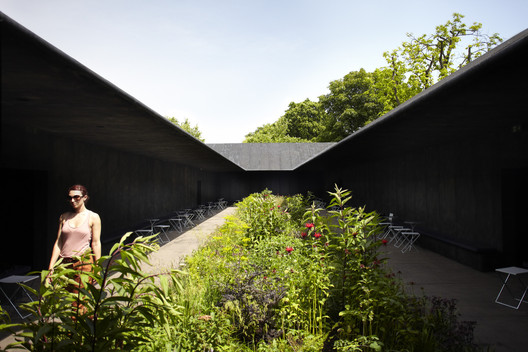 Zumthor continued his play on solids and voids during his turn at the Serpentine Pavilion. Much like his previous work such as in the Therme Vals, the interplay became a means of creating various effects and setting contemplative or visceral moments within his buildings. Zumthor ultimately set out to realize a hortus conclusus: an enclosed garden meant to act as an intimate space that was designed by Dutch garden designer, Piet Oudolf. Unfortunately there is no publicly confirmed information regarding the pavilion’s current whereabouts. 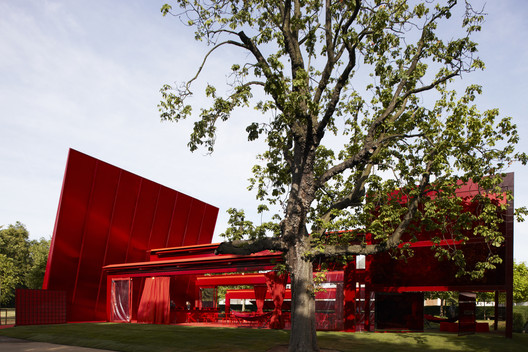 The French architect’s design for the 2010 pavilion was unrelentingly – and unapologetically –  red, combining typical building forms with deconstructivist flair. A pitched and retractable canopy is a sly reference to Parisian awnings, blurring the lines between inside and out. While there’s no confirmed public information about the pavilion’s current whereabouts, the impact of the vibrant pavilion – and its famous interior full of ping pong tables – has had more than a passing influence on designs for public space. 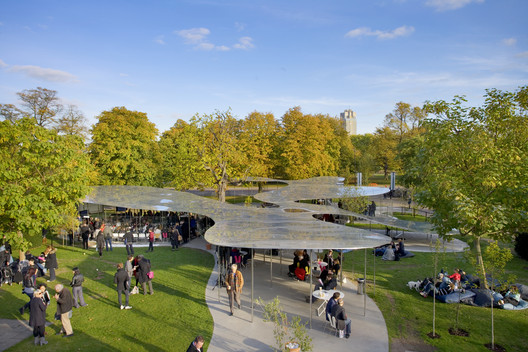 Kazuyo Sejima and Ryue Nishizawa’s design was perhaps the most straight-forward and structurally simple: a flat piece of highly-reflective aluminum supported by delicate columns. But in its simplicity their structure appears to “soar like smoke, melt like a sheet of metal, drift like a cloud, or flow like water.” Seen in plan view, they also incorporated a recurring form in their work: a conglomeration of curvilinear blob-like shapes. Unfortunately there is no publicly confirmed information regarding the pavilion’s current whereabouts.

Frank Gehry’s Serpentine foray was visually an inversion of his expected approach. Rather than an explosion of form, the pavilion was relatively understated and inwardly focused, designed to be a hybrid of a street and an amphitheatre. The pavilion was bought by Irish property developer Paddy McKillen, and is nestled in his vineyards of Aix-en-Provence. Today, the structure is the backdrop for open air concerts – not dissimilar to its original purpose. 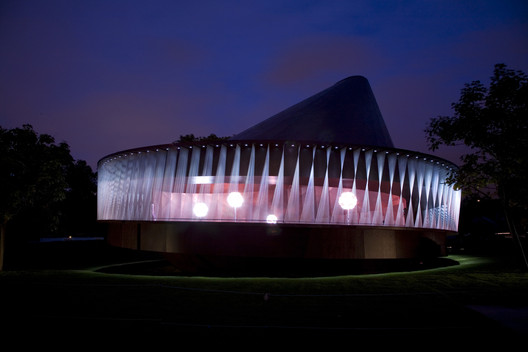 The 2007 pavilion, a collaboration between artist Eliasson and architect Thorsen (of Snøhetta) was a timber-clad, multi-story structure – and at the time, the most ambitious pavilion to be realised. Reminiscent of a spinning top, the pavilion played host to not just the typical program of lectures, but also weekly “experiments” from artists, scientists, and architects around the world.

The pavilion was purchased by an anonymous buyer with a self-professed “addiction” for the pavilions: he owns no fewer than four of the 18 pavilions. The buyer also owns the 2006 pavilion by Rem Koolhaas, the 2005 pavilion by Alvaro Siza and Eduardo Souto de Moura, and the 2003 pavilion by Oscar Niemeyer. 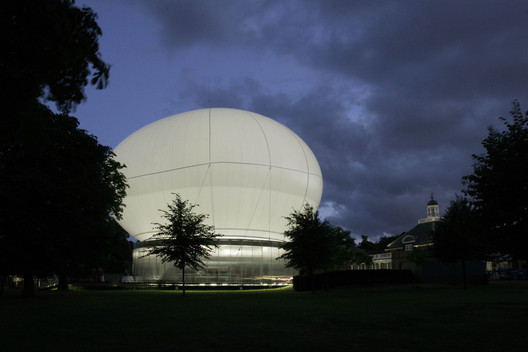 Koolhaas’ 2006 pavilion was appropriately distinctive, taking the form of an “ovoid-shaped” weather balloon whose position could be shifted to protect the amphitheater below from changing weather patterns. The pavilion hosted an extensive variety of talks, discussions, and panels, establishing the Serpentine Pavilion project not just as an architectural folly but an event and venue itself.

Portuguese architects Alvaro Siza and Eduardo Souto de Moura paid homage to the domestic scale and neo-classical style of the permanent and neighboring Serpentine Gallery. The design centered around a basic rectangular grid, distorted to create a curved interior space. The pavilion is owned by the same anonymous buyer who owns the 2007 pavilion (Olafur Eliasson, Kjetil Thorsen, and Cecil Balmond) , the 2006 pavilion (Rem Koolhaas, Cecil Balmond, and Arup), and the 2003 pavilion (Oscar Niemeyer). 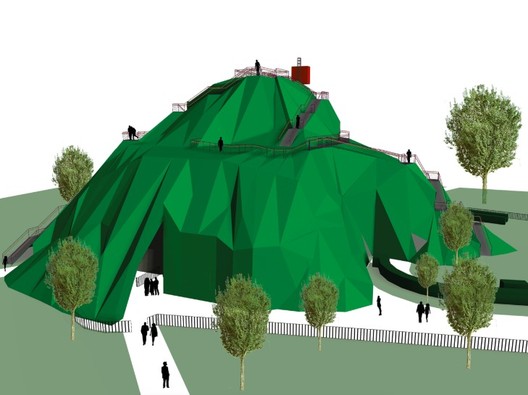 In true MVRDV fashion, the proposal for the 2004 pavilion was utterly unique and deeply ambitious. Rather than simply occupying the space in front of the gallery, the Dutch architects proposed building a kind of mountain over the gallery, creating an artificial natural element and allowing visitors to occupy the pavilion both inside and out. Unfortunately, due to budgetary and time constraints (designers have only six months to design and build the pavilion), the proposal was never built.

The Brazilian architect’s pavilion fit seamlessly into his established portfolio of work. A twisting, red-carpeted, and floating ramp (reminiscent of the entry sequence to his Niteroi Museum in Rio de Janeiro) led visitors to a concrete auditorium open on two sides to afford views across the park. 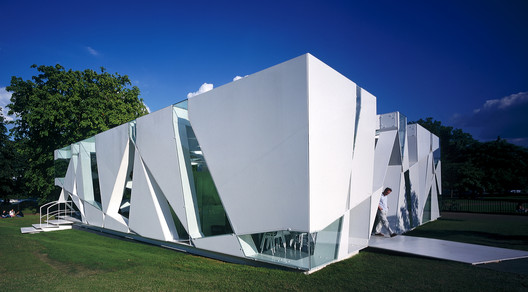 Though an apparently random agglomeration of triangular and trapezoidal shapes, the Japanese architect’s pavilion was based on an algorithm derived from the expansion of a rotating cube. The simple exterior shape betrays a complex interplay of light on the interior – the result of the algorithmic facade. The pavilion was bought by the French luxury hotel Le Beauvallon where it enjoys a sun-dappled life on the Cote d’Azur. 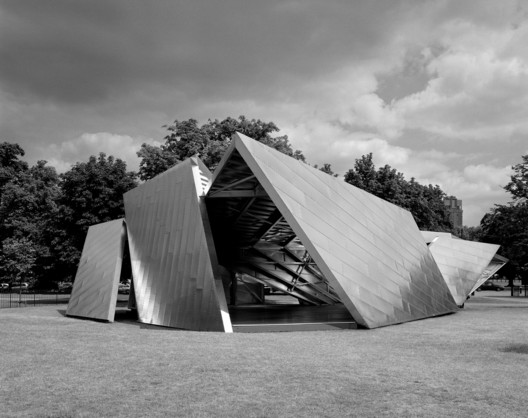 Named “Eighteen Turns,” Libeskind’s Serpentine design was a formation of angular metallic planes arranged to form a visual puzzle. The pavilion was famously designed as a “flatpack” to facilitate its anticipated nomadic lifestyle post-Serpentine. Unfortunately, aside from a brief appearance in Cork for the city’s 2005 celebrations as the European Capital of Culture, little has been seen of the pavilion since its initial installation in 2001. 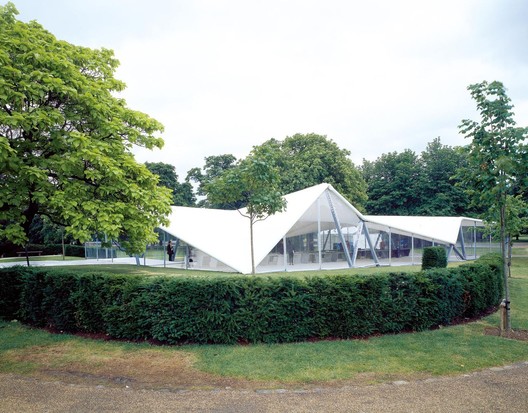 Her first built work in her home country, Zaha Hadid’s pavilion marked her shift from a ‘paper-architect’ to the starchitect she eventually became known as. Her design was, in her portfolio, a relatively simple one: a tent-like structure with a mountainous pitched roofscape. It is perhaps appropriate that the pavilion that started it all is perhaps the one with the most unexpected post-Serpentine life; after its season in the park the pavilion was bought by a theme park in Cornwall where it has been used to host a range of local events.

“It’s quite a challenge to maintain,” reported Dean Woods, the park’s entertainment co-ordinator, to Olly Wainwright of The Guardian in 2015. “Because of all the different angles in the roof, as soon as I’ve fixed one bit, then the water ponding shifts to another area.”