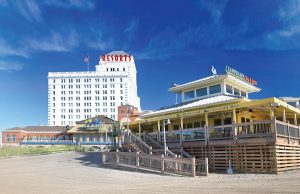 Resorts will become Atlantic City’s fifth casino to be operating a physical sports book, the property itself has confirmed in a press release. Its betting facility is slated to open doors on Wednesday at 11 am, pending approval from New Jersey gambling regulators.

Earlier this month, Resorts became New Jersey’s first casino to launch online and mobile sports betting. The roll-out of its digital offering was the result from its partnership with DraftKings. The casino has also recently sealed a partnership with The Stars Group, owner of the BetStars betting brand, among others.

Resorts’ physical sports book will feature a 12-foot video wall as well as 15 television screens. There will be six betting windows and four self-serve kiosks located across the facility.

Resorts will be Atlantic City’s fifth casino to launch a sports book on casino premises. The Borgata was the first to open a betting facility as part of its gaming floor. Its physical sports book went live on June 14. Ocean Resort Casino launched its sports book on June 27, followed by the Wild Wild West Casino at Bally’s, which took its first sports bet on July 30. Most recently, Harrah’s went live with a temporary sports book. According to official data by the New Jersey Division of Gaming Enforcement, the amount of $16.4 million was generated in sports bets in the period between June 14-30. That figure included bets taken in by the Borgata, Ocean, and Monmouth Park racetrack, which, too, began operating a sports book on June 14.

Revenue generated by the three properties amounted to nearly $3.5 million, with Monmouth leading the way with $2.3 million, followed by the Borgata with $986,831 and Ocean with $192,671.

New Jersey was the first state to legalize sports betting, following the mid-May annulment of the federal ban on sports betting. The state was actually the one to lead the push for the eventual lift of the ban for a number of years and eventually brought the matter to the US Supreme Court.

SCOTUS announced last year that it would review New Jersey’s petition and issued its ruling, favoring the state, on May 14. The decision of the nation’s top court made it possible for all 50 states to legalize sports betting if they believe this would be a positive move. The 1992 PASPA ban prohibited betting on professional and amateur sports leagues at a federal level.

New Jersey managed to craft a sports betting legislation and go live with sports betting operations within a month after the ban’s annulment. The move came as another important manifestation of the busy year the state’s gambling industry has had. Aside from the legalization of sports betting, New Jersey and Atlantic City, in particular, has seen the opening of two new casinos – Hard Rock Hotel & Casino Atlantic City and Ocean Resort Casino. The two new properties and the legalized sports betting offering are hoped to help the state’s gambling sector revitalize after a disastrous decade that culminated in the closure of five Boardwalk casinos within two and a half years.