No Color Is Off Limits For Sies Marjan — Except Maybe One 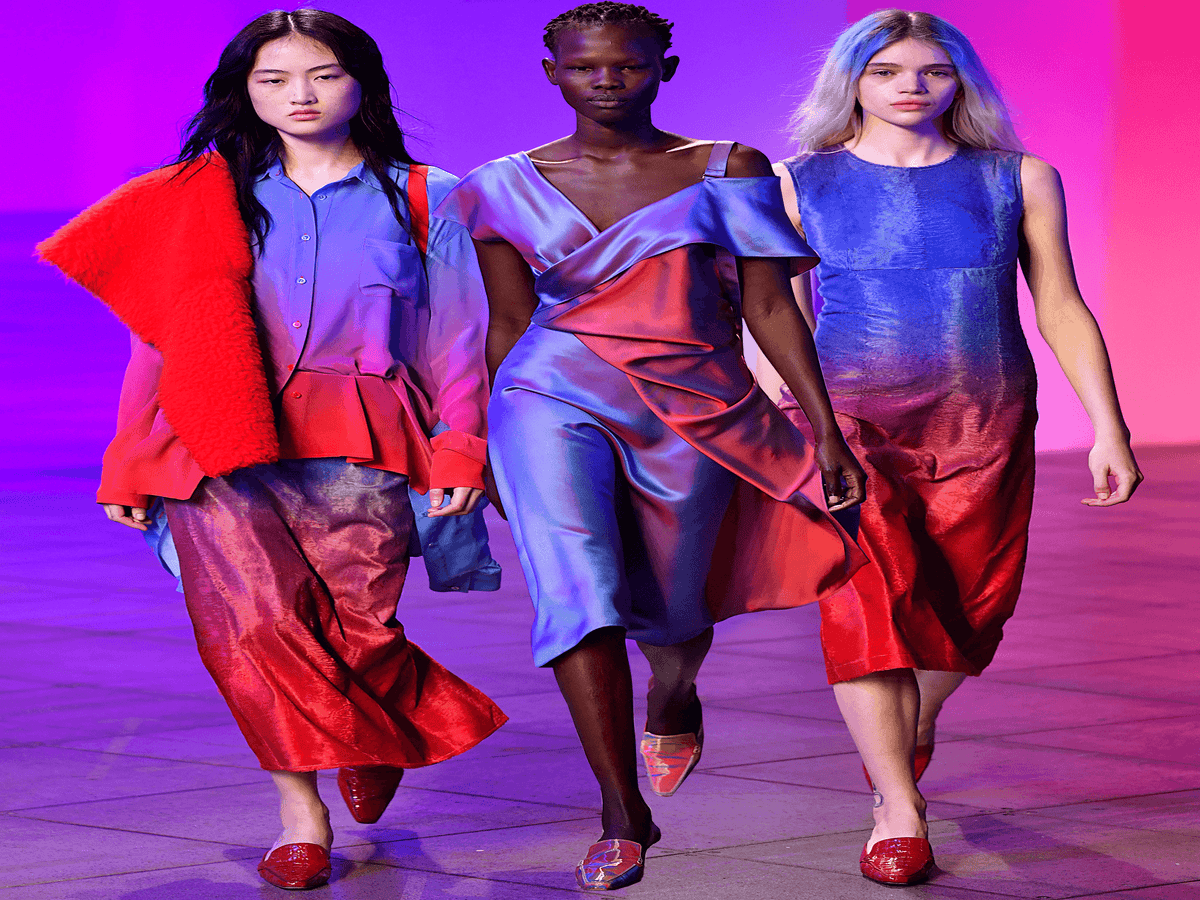 “Everything is so dark…” says Sander Lak, the man behind New York-based label Sies Marjan, over coffee in London. “Everything is doomed, it’s all so apocalyptic; so there’s something really nice about wearing a bright pink shirt on a day that you really feel like shit — it lifts you up.” Though the shirt Lak is wearing right now is actually a baby blue tie-dye number, it’s no less joyful.

The designer’s optimism, charm, and lack of pretense — evidenced in his choice of attire — has garnered Sies Marjan a cult following, and unsurprisingly so. When a single scroll through Twitter reminds you of nuclear war and men abusing their power, maybe a piglet pink shearling coat, high-shine holographic two-piece, or egg yolk yellow silk camisole are the mood-boosting antidotes we could use right now.

“I don’t directly consider the political climate when designing but, like everyone else, I’m in the center of it all. Sometimes, I want to crawl in a corner or hide under a blanket,” he says. “Other times, though, I want to just burst into color.”

With burnt golds, tomato reds, and mint greens, Lak’s collections really are a kaleidoscope of color. This vivacity came as both a shock and sweet relief to the monochrome New York fashion scene. When the brand’s first collection landed in Barney’s et al in February 2016, it stood out amid a palette of black, gray, navy, and white clothing. “People said to us, ‘You’re in danger. Nobody in New York wears color.'” How wrong were they. 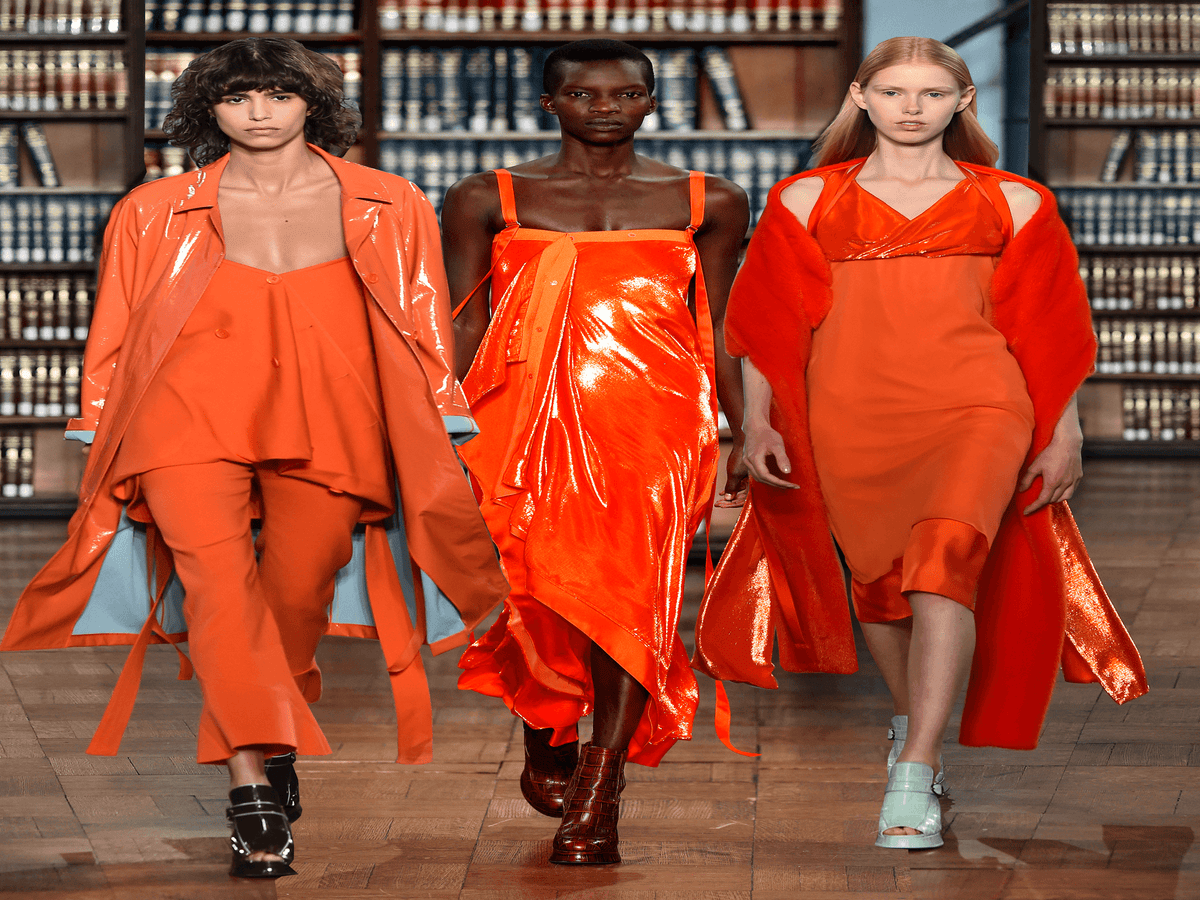 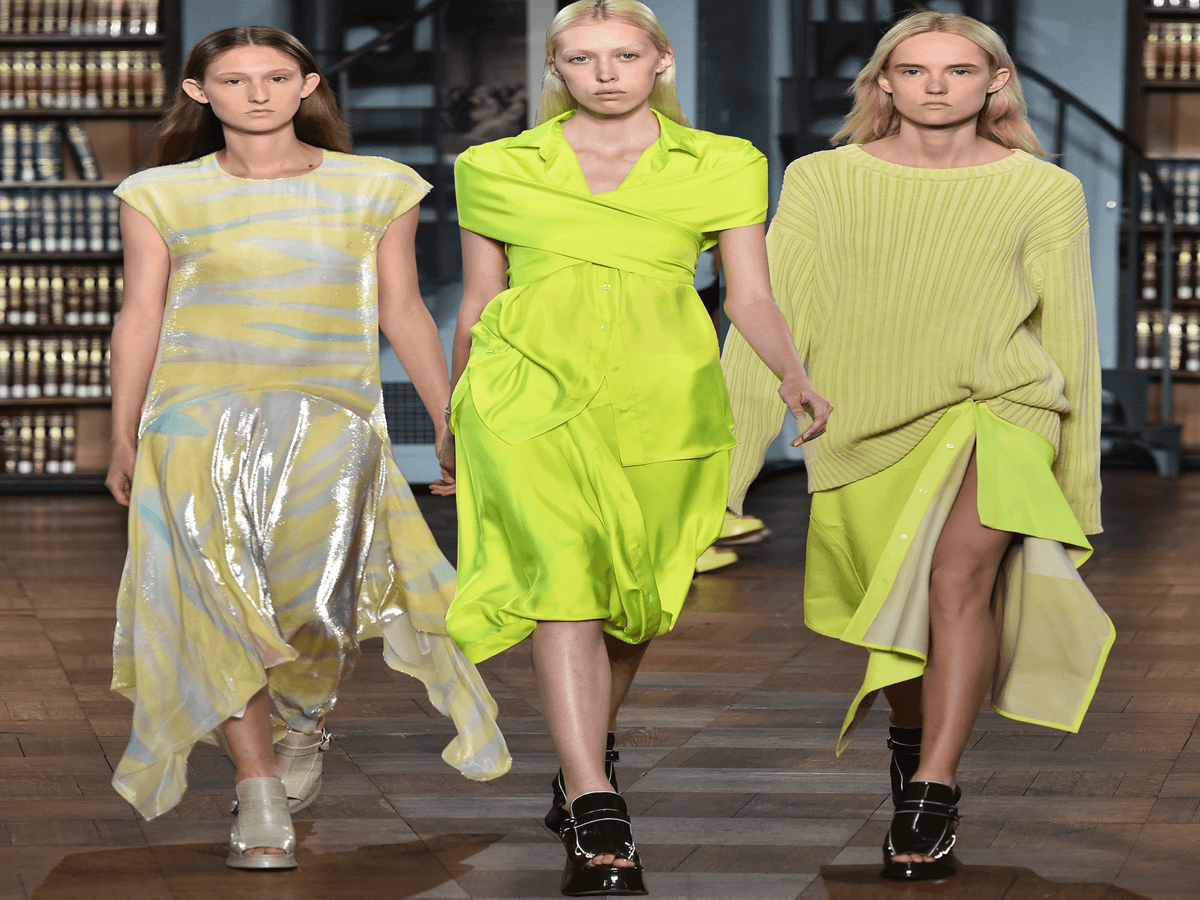 From the once-unspoken rule that New Yorkers only wore black, the city — and its fashion week schedule — is awash with color. Just look at the spring/summer 2018 offerings: slinky serpent greens at Adam Selman, chirpy blue raincoats at Calvin Klein 205W39NYC, buttercup yellows at Marc Jacobs. Of course, this can’t all come down to Lak’s vision at Sies Marjan, but he has undoubtedly had a strong hand in making the city feel, well, welcoming.

Beyond serotonin-boosting color, what’s so appealing about Sies Marjan is the sense that the clothes really are for everybody. Lak has cast transgender models in his shows, presents menswear and womenswear together, and wears the pieces himself — acting as a walking advertisement for the tactile fabrics and playful cuts that embody the brand. While we lost over impressive clothes every season, it’s not very often that we feel we can wear them in real life.

“We are a high-end fashion brand,” he declares. “And while our lookbook is always a fantasy, there’s a reality in everything we do. Our clothes aren’t driven by the full look, where if you have only one piece it looks out of place. I think that’s why streetwear is having such a big moment — it’s grounded, it’s about reality; that’s what people want.” Though that idea comes at an unrealistic cost, he has a point.

This outlook comes down to Lak simply being “a lover of clothes,” a designer who creates pieces he wants to wear; pieces that would suit his friends and fit in with their lives. “What I’ve always found weird is when a designer proposes a certain look and then comes out to bow at the end of a show in a black T-shirt and black jeans,” he laughs. “I wear our menswear and womenswear. It’s important for people to connect with me and the brand this way. I wear color and full tonal looks; I practice what I preach.” The same could be said for his contemporary cohorts, like Victoria Beckham and Jacquemus, who are rarely caught wearing anything but their own clothes.

We saw this at the 2018 CFDA Awards in June, when Lak wore a playful Sies Marjan ombre red and black suit, accompanied by actresses and models Julia Garner, Bria Vinaite, and Lineisy Montero, all of whom wore the brand’s pastel-hued and reflective pieces. The color naysayers certainly ate their words that night, as Sies Marjan picked up the sought-after Swarovski Award for Emerging Talent. Yet despite that newcomer nod, Lak is no industry novice.

Before moving to New York City in 2015 for Sies Marjan — he’s based in Manhattan because “Brooklyn for me is like London, Berlin, Antwerp…like a fake Europe” — he worked at Dries Van Noten in Paris as head of design, and before that at Balmain with Christophe Decarnin, Phillip Lim, and Marc Jacobs. “What’s great about the experiences I’ve had is that they’re all so different — not just in terms of aesthetics, but in how they run their business,” he explains. “I loved having a frame to push up against, where it wasn’t about me and I had to navigate through it.” Learning the various aspects of a fashion house — from new languages and a social presence to business models — gave him a 360° perspective, meaning he could jump into Sies Marjan knowing what was to come.

Adaptability comes naturally to Lak, who grew up all over the world. “I was born in Brunei, I lived in Malaysia, Africa, Scotland,” he says, “so I was exposed to so many different things, from the color of nature in a place to people’s religious beliefs.” While he wouldn’t say his work is a direct product of that global upbringing, he admits it brought an openness to his designs. “I’ve seen so much from such a young age that not a lot surprises me — there aren’t a lot of things I find really ‘wrong.'”

This broad-mindedness could also be attributed to his time studying under the late Louise Wilson at Central Saint Martins. “She was very tough but really understood what she was able to do with me, to push me,” Lak says of the legendary professor. “For me to doubt myself as much as I did when I was under her wing was so healthy, because it broke down all of the little tricks and trades I had always thought I could charm my way into,” he laughs. “She broke you down and expected you to build yourself back up, and she created this stressful environment that totally prepared us all for the industry — it was like therapy, one of the most important experiences of my life. I do miss her.”

While Lak — like many of Wilson’s students — is now thriving in the industry, attending Central Saint Martins wasn’t his original plan. “I only went because I didn’t get into film school. Fashion was sort of an unimportant mistress on the side of my marriage to film,” he notes. “I’d never even touched a sewing machine, but once I got to school, it made so much sense. Being a designer and a director are the same thing with a different end product; you have a vision, a team of people that contribute, a premiere or catwalk show, reviews… Then you have to see if your film has longevity, if your clothes work off the runway. There are so many parallels.” 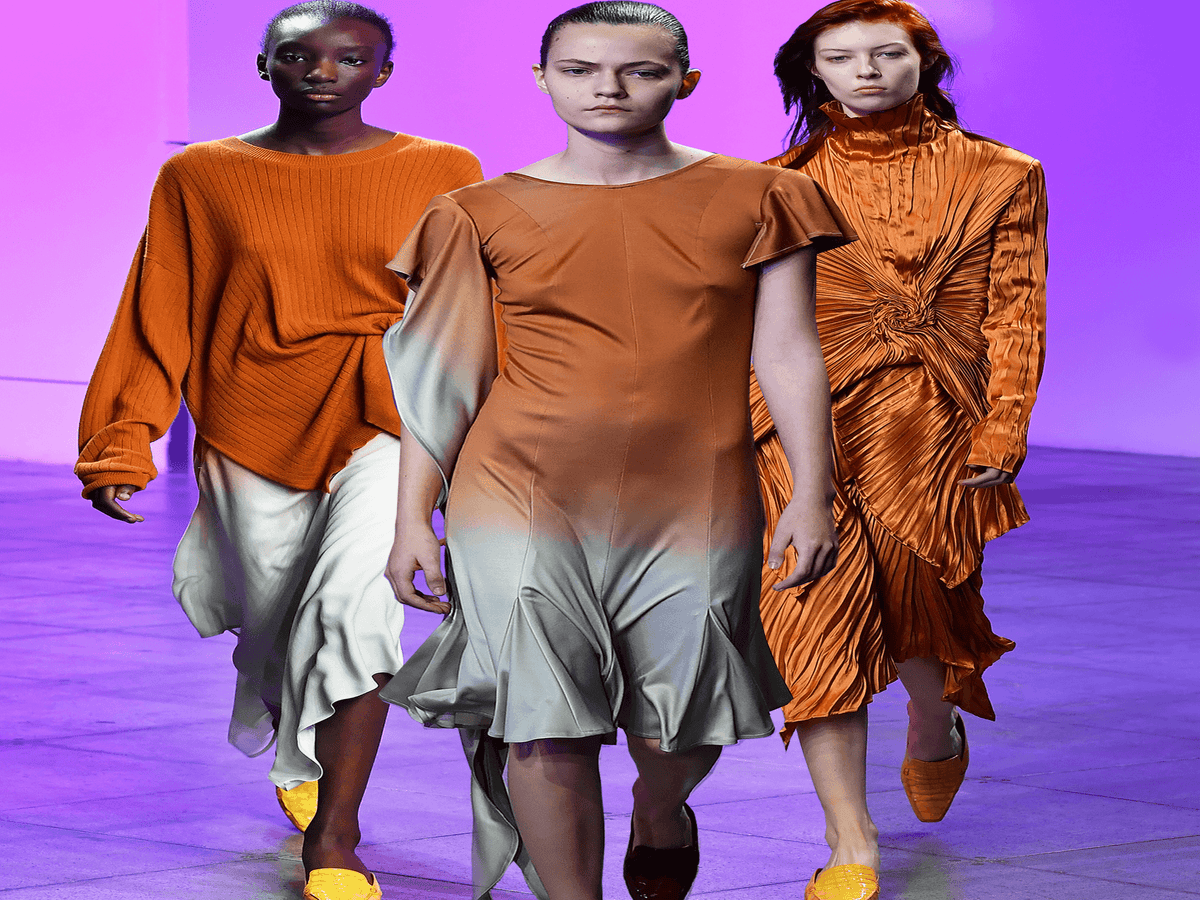 It’s unlikely we’ll be watching a Lak-directed Sies Marjan fashion short anytime soon — “I never look at films and fashion with the same eye” — but one film that inspired him years ago was The Fifth Element. “It’s a shitty movie, but Jean Paul Gaultier did the costume design and had Milla Jovovich with orange hair in the orange braces. That was the first time I was distracted by the clothes in a movie.”

This first love is one of the many reasons Lak is an intriguing designer. Another is his avoidance of Instagram — unlike figureheads like Virgil Abloh, who use it to promote their brands, friends, collaborators, and hype. While Sies Marjan the brand has an Instagram account with 90k followers, Lak says he’s seen what overexposure and an invasion of one’s privacy can do to a person. “I’ve been in the industry for a while, and I’ve seen what both immense success and crashing failure do to someone,” he explains. “I’ve always been behind someone going through that, and I know what it would do to me. I stand by social media as a tool to make my business work, but I want to keep a part of myself for me and my people, because I know I could get lost in it.”

Luckily, he says, he’s not a creative that needs to be battling his inner turmoil to make great work. In 2018, when it’s easy to be seduced by the followers, likes, and fame that one’s personal brand brings, it’s refreshing to hear someone in the center of a circus assert the importance of self-preservation. In an industry full of egos and characters, Lak is someone you’d want to grab a drink with and chat for hours about a director’s best film — and of course, to dress you in every color of the rainbow. Even in the face of the relentless volume and the fast pace of collections, presentations, and shows, he remains optimistic. “I love working, I love creating, and if I have to make more, I will — I don’t want to do anything else. And anyway, we get to rip up the rulebook now — it’s so freeing.”

Like what you see? How about some more R29 goodness, right here?

And The 2018 CFDA/Vogue Fashion Fund Finalists Are…